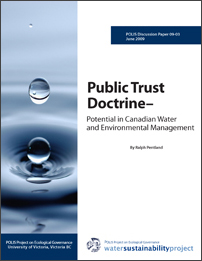 Western notions of modernity must necessarily be tempered by an understanding that certain natural resources – especially air, freshwater and oceans – are central to our very existence; and that governments must exercise a continuing fiduciary duty to sustain the essence of those resources for the long-term use and enjoyment of the entire populace. Although Canadians have been slow to embrace the public trust notion, it has played a central role in water and environmental management in the United States since the 1970s; in that country, it mirrors an historic expansion of public consciousness and concern away from immediate private interests to the interests of others in society, future generations of humans, and even non-human life. A number of changes have taken place in Canada over the past few decades that suggest the time may right to move the public trust concept, or at least something akin to it, forward in the Canadian context; the only question that remains is whether policy-makers or the judiciary will take the lead.