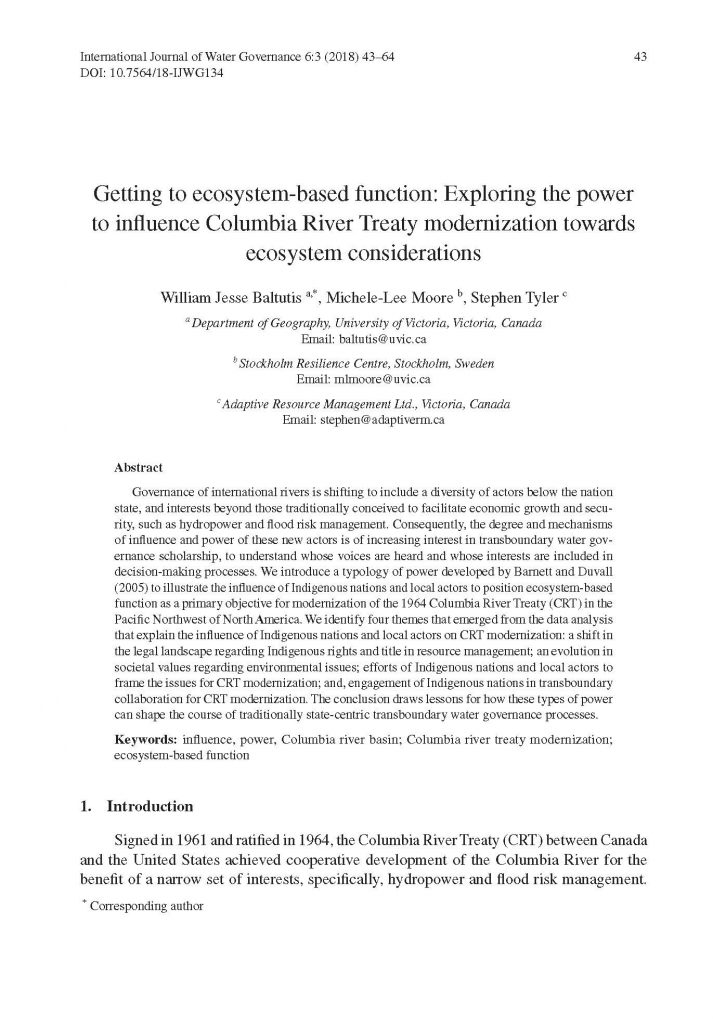 Governance of international rivers is shifting to include a diversity of actors below the nation state, and interests beyond those traditionally conceived to facilitate economic growth and security, such as hydropower and flood risk management. Consequently, the degree and mechanisms of influence and power of these new actors is of increasing interest in transboundary water governance scholarship, to understand whose voices are heard and whose interests are included in decision-making processes. We introduce a typology of power developed by Barnett and Duvall (2005) to illustrate the influence of Indigenous nations and local actors to position ecosystem-based function as a primary objective for modernization of the 1964 Columbia River Treaty (CRT) in the Pacific Northwest of North America. We identify four themes that emerged from the data analysis that explain the influence of Indigenous nations and local actors on CRT modernization: a shift in the legal landscape regarding Indigenous rights and title in resource management; an evolution in societal values regarding environmental issues; efforts of Indigenous nations and local actors to frame the issues for CRT modernization; and, engagement of Indigenous nations in transboundary collaboration for CRT modernization. The conclusion draws lessons for how these types of power can shape the course of traditionally state-centric transboundary water governance processes. Keywords: influence, power, Columbia river basin; Columbia river treaty modernization; ecosystem-based function

Getting to ecosystem-based function: Exploring the power to influence Columbia River Treaty modernization towards ecosystem considerations.