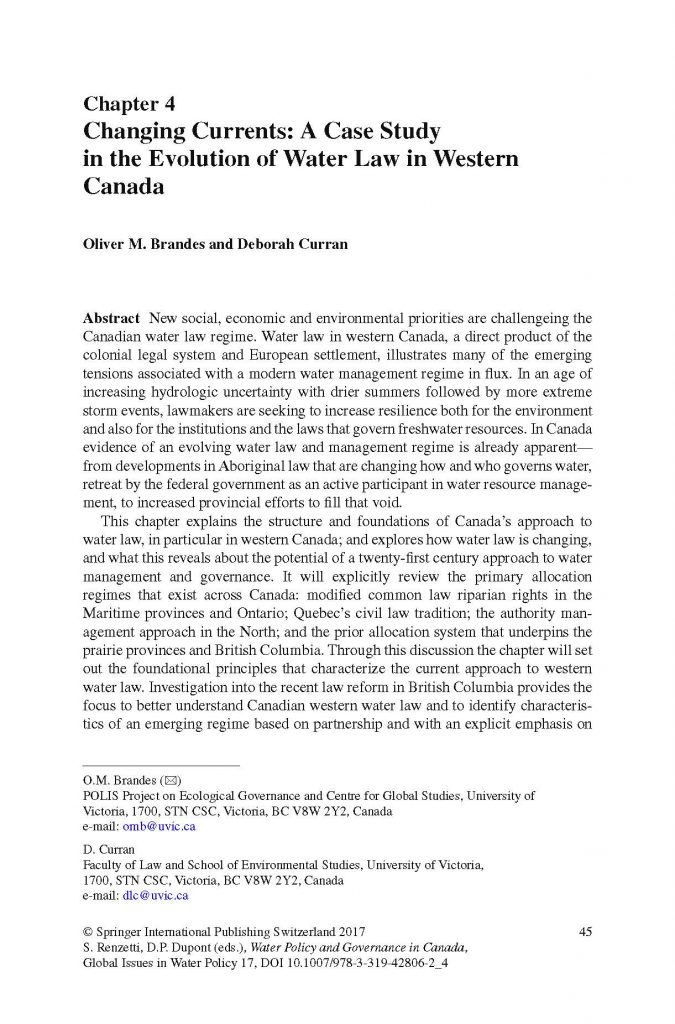 Abstract
New social, economic and environmental priorities are challengeing the Canadian water law regime. Water law in western Canada, a direct product of the colonial legal system and European settlement, illustrates many of the emerging tensions associated with a modern water management regime in flux. In an age of increasing hydrologic uncertainty with drier summers followed by more extreme storm events, lawmakers are seeking to increase resilience both for the environment and also for the institutions and the laws that govern freshwater resources. In Canada evidence of an evolving water law and management regime is already apparent—from developments in Aboriginal law that are changing how and who governs water, retreat by the federal government as an active participant in water resource management, to increased provincial efforts to fill that void.This chapter explains the structure and foundations of Canada’s approach to water law, in particular in western Canada; and explores how water law is changing, and what this reveals about the potential of a twenty-first century approach to water management and governance. It will explicitly review the primary allocation regimes that exist across Canada: modified common law riparian rights in the Maritime provinces and Ontario; Quebec’s civil law tradition; the authority management approach in the North; and the prior allocation system that underpins the prairie provinces and British Columbia. Through this discussion the chapter will set out the foundational principles that characterize the current approach to western water law. Investigation into the recent law reform in British Columbia provides the focus to better understand Canadian western water law and to identify characteristics of an emerging regime based on partnership and with an explicit emphasis on protecting water for nature. This case study explores how modern water governance requires a more collaborative approach where all governments, rights holders, and stakeholders have roles and responsibilities, with creative integration of top-down and bottom-up planning and decision-making. The example of British Columbia demonstrates how this water law regime is “changing the current”—evolving gradually toward a more collaborative and adaptable system with the promise of its new Water Sustainability Act.

Changing Currents: A Case Study in the Evolution of Water Law in Western Canada